skip to main | skip to sidebar
This is the official blog of Andrew Campbell and Brad Nichol's Star Class Campaign for the London 2012 Olympic Sailing Regatta to be held in Weymouth, England in August 2012

Off to the Races

The 2010 Star World Championships kicked off today with Race 1 inside the bay in Rio de Janeiro.  It only took two attempts to get a clean start right next to the Rio airport with an ebb tide pushing the boats towards the line.  With the committee boat end favored in the current, Andrew and I played it safe, starting one third of the way down the line looking for less confusion and some clear air.  We found neither, but Andrew did a masterful job of managing traffic and working our way to the right to get out of the current.

To say that the tidal flow inside the bay was confusing would be a drastic understatement.  It was easy to be in one knot less current only one hundred feet away from a competitor.  As we approached the mark along the starboard tack layline, we thought we were fetching the mark easily until we saw the lead boat stop in their tracks.  Only 50 feet from the mark there was a tide line with a two know differential.  Needless to say we did not lay the mark, and on our second attempt to round, we were swept into the mark.  (The leaders, and countless others made the same mistake.)  This double oops cost us 20 places according to a friendly spectator.

Both runs were a game of when to jibe and cross the current line.  On the first run we guessed correctly and passed boats, on the second we waited too long and dropped four boats.  The second and third beats were all about finding the current eddy that would give you an upwind advantage.  World Champions, and locals Torben Grael and Alan Adler both showed the fleet where everyone should have been, passing boats on either side of them.

In the end we finished in a tight battle with the Irish, Germans, Argentineans, and Greeks, all shooting towards the line at the same time.  The Greeks we just on our weather hip across the line but we were 12th and they was 16th.  One boat length means al lot at the World Champs!

Posted by Brad Nichol at 3:38 PM No comments: 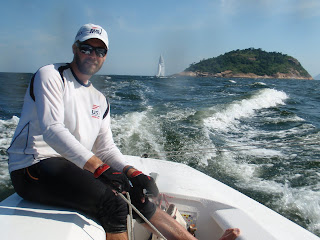 Andrew and I have been in Rio this week training for the 2010 Star World Championships, which begins Saturday January 16th with 81 teams, representing 20 Countries. So far the training has been excellent despite the oppressive heat, with local fleet racing this past weekend, and Team USA coach Ed Adams running drills and practice races this week.

We are not daunted by the level of competition, only driven to show our best stuff and start 2010 off with a bang! Stay tuned this week for more  from HOT sunny Rio de Janeiro.

Posted by Brad Nichol at 4:06 PM No comments:

We sailed the practice race today before the South American Championships starts tomorrow sailed out of the ICRJ (Iate Clube do Rio de Janeiro). Brad and I put up the new jib today to make sure it was all set to go. The distance to the race course sails literally in the shadow of Sugar Loaf mountain towering a thousand feet above the bay. Once we get through the massive wind shadows, we turn right out the harbor entrance into six foot ground swell and a funneled 15 knots of breeze. The next 3 miles upwind to the racing area the wind dissipates and steadies to an average 6-10 knots, loading and unloading as the swells pick us up and put us down.

We tuned on the way out to the course to day with Robert Scheidt and Mark Mendelblatt. Brad and I are slowly working the kinks out of the P Star, but were certainly happy with the speed around the course. We started the practice race three boats up from the pin and unfortunately led around the first windward mark and the first leeward before we turned back to the harbor (it is, after all, bad luck to win the practice race). The sail in and out

First race starts tomorrow at 1330. We'll let you know how it goes.
Posted by Andrew Campbell at 2:09 PM No comments:

Has Parity Returned to Star Equipment? 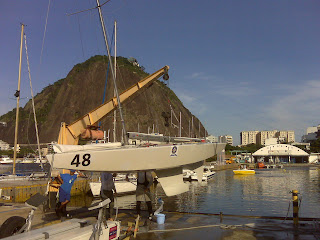 Today was a beautiful day of training on Rio off of Copacabana Beach. We had six boats out for speed testing, amongst them, three world champions, four different boat builders, four sail makers, and in the first lineup over 20 minutes, nobody had a major speed edge. There has been concern over the past few years that the star class has become out of reach for all but the top professionals, but in reality the top professionals gravitate towards the star class because they can showcase their talents against the best.

At dinner the discussion turned to the boat market. In the US alone there are at least six Olympic boats, from three builders, for sale for between $30,000-40,000. In terms of sails, Quantum has been using the same Z4/P2 for the last few Olympics, Ian Percy’s Gold Medal combination is available from North, and there are at least three new sail makers in the mix. There are now boats and masts being built in the US, so now is the time to get in to the best racing around.

Andrew and I are training in Rio for the South American Championships, which begin Thursday. Stay tuned for more this week!
Posted by Brad Nichol at 4:34 AM No comments: 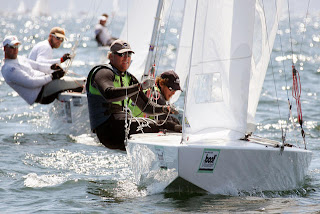 Here's a shot of Brad and I trying to chase down Mark Mendelblatt and Mark Strube as we round mark 1 of the Medal Race 1, 2 and they go on to win the regatta. Congratulations guys!

There is some video from the 23rd and the Medal Race on this page: http://www.world-of-sailing.info/olympic-classes/star/. Look out for us, we're black numbers USA-8241

Here is the link to our GPS tracking from last week in Kiel. What a great a feature to be able to playback the entire race! The weather was so uniquely nice in Kiel, you might well have wanted to be there to see it.

Full results here: http://results.regatta-info.de/result_details.php?results=2009-06-24_Star_Wettfahrt_5_Extra.xml
Posted by Andrew Campbell at 5:10 AM No comments:

Kiel off to a slow start

One race in two days is not a pretty picture for any regatta. Kieler Woche especially is legendary for its windy, rainy and long days on the water. Today could not have had less in terms of breeze. Being the longest day of the year (sunrise was at 445am and sunset around 10pm), we were lucky to have been drifting around the boatpark instead of drifting around Delta course four miles offshore. We were postponed at 9am and again at 1130 before they called racing off at 3 due to spotty wind and unstable weather. Rain and storm cells have certainly been the dominant factor here so far.

Kieler Woche has lived up to its reputation as quite the scene however. Each day, especially this weekend, thousands of festival goers and local denizens have been enjoying the brat-sellers and temporary beer gardens set up overlooking the harbor and boatpark. Today about 800 sailors joined the crowd while waiting for breeze.

We still stand on our 13th place finish from day one waiting for our opportunity to fight up the leaderboard. Tomorrow should present 3 such opportunities. Keep your fingers crossed for breeze!
Posted by Andrew Campbell at 1:47 PM No comments:

The 2009 Kieler Woche is set to begin tomorrow here in northern Germany. After a couple days of sailing, Brad and I are ready tuned up and ready to go for two races tomorrow on the outer "Delta" course some 4 miles north east of the Olympiazentrum in Shilksee. We've had a couple of days to recover from the jetlag and given the airlines a good chance to get our bags delivered after losing them in Heathrow. Usually the European trip does take a few days to get all those sorts of details sorted. We burned through the classically efficient german registration system here yesterday, weighed in 1.5 kilos light, stamped our sails, established our mooring at the bulkhead, and all the other star-class things that need doing. We've been lucky to that point that the weather had been cooperating. But, just as we were getting ready to go for a short sail today, the standard Kieler Woche Weather showed up in the form of a nasty black cloud, a significant drop in temperature, lightning all across the sky, heavy rain, and little flecks of hail. Alright! We huddled under our new set of Norths and waited for the weather to pass and actually got a couple of really nice hours sail testing.

Two races scheduled tomorrow. Check the results and see the scene that is Kiel Week at: www.KielerWoche.de

Also check out out our feeds at:
www.SperryTopsider.com
CampbellNichol2012.blogspot.com
Posted by Andrew Campbell at 8:59 AM No comments: